So, you want to go vegan, or you just went vegan, and you don’t know what to cook? Or you’re not sure where to begin? Perhaps you’re not much into cooking and want some easy and quick recipes, or maybe you are an amazing chef who is eager to try out new creations.

Either way, it’s always good to have a few handy cookbooks on the kitchen shelves. Whether you’re a chef, newbie, amateur, or a spontaneous cook who likes to throw things in here and there, these cookbooks are for everyone, the best vegan cookbooks for beginners. In this post I will cover four cookbooks that have easy and uncomplicated recipes, and you do not always need to go on a scavenger’s hunt to find the ingredients. I’ll cover Vegan Mac and Cheese, by Robin Robertson, No Fuss Vegan, by Roz Purcell, Vegan Meal Prep, by Zara Elby, and Plant-Based on a Budget, by Toni Okamoto.

As the title suggests, going vegan doesn’t mean you have to give up those cheesy dishes you used to love. You can keep on loving and enjoying them. Vegan mac and cheese is pretty easy to make and it is creamy, cheesy, and yummy. The title for this cookbook is appropriate, since Robin Robertson covers several meals that we have grown up with and we are wont to let go of. Guess what, you don’t have to let go of them, and you’ll see how in Robin’s recipes.

One more thing that’s emphasized in this book is time. No one likes to spend all day cooking, and Robin’s recipes are designed to spend minimal time in the kitchen. For most of us, who lead busy lives, this is a plus point 🙂

There is a plethora of vegan recipes (more than 50), such as Cheesy Primavera Mac, Buffalo Caulifower Mac, Peas with Mushroom Bacon, vegan hot dogs, a veggie-filled pasta dish, etc.

“Anything you can cook, I can cook better vegan,” the author says. “I can recreate anything.” 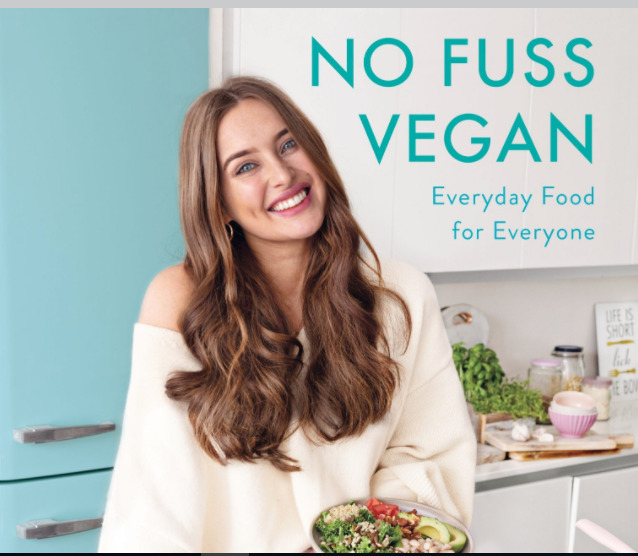 Roz Purcell is a firm believer in fueling your body right. And she has a point, doesn’t she? Our bodies are complex machines and they need the right fuel. This cookbook includes breakfast, snacks, lunch, dinner, and dessert recipes. Corn fritters, vegan black pudding, shortbread, sausage rolls, “no fuss” tangine, and miso aubergine are the author’s favorites.

Miso aubergine, sounds delicious! I love the taste of miso and I love aubergine. You can’t go wrong with that.

Vegan black pudding, that’s definitely something on my to-do (or to-make) list.

It’s like Roz said: “We all know how to cook with meat, chicken, fish and eggs, so I wanted to create a book that championed easy and accessible vegetable-based meals for everyone.”

This is Roz Purcell’s third cookbook, and her previous two books were nominated for Cookbook of the Year at the Irish Book Awards. No Fuss Vegan will be launched on January 2, 2020; hence, it’s not available for purchase yet. When it’s out, I will definitely let you know! 🙂 So, mark your calendar, and start the new year with a healthy, no fuss, and easy cookbook.

Yep, this one makes life a lot easier, because – as the title of this book suggests – these vegan recipes can be prepared ahead of time. You can prep in the weekends or perhaps the night before, and save lots of time. Breakfast, lunch, dinner, dessert, and smoothies are featured in this cookbook. The meals that you prep can be taken on the go and they can also be frozen.

So, all in all, this is perfect for the beginner, especially when you’re a little busy. The meals are plant-based, healthy, easy to make, and they save time.

Plant-Based on a Budget, Toni Okamoto

Aha! I think we all like the sound of that title. Sometimes we all need to budget, right? No one likes it, I sure don’t, but there are times when it’s best to budget our expenses. And when it comes to food and saving money, we often tend to buy unhealthy stuff. Budgeting and eating healthy goes together though, and this book will show you exactly how 🙂

Not only does Toni Okamoto share her awesome recipes, but she also gives you useful tips on saving money and time, when out shopping, when preparing meals, and so on. In general, the recipes are guides, and the author recommends – like I always do 😉 – that you improvise; for example, change certain ingredients for something you already have in your kitchen pantry, and experiment. Be bold 🙂

“When I became a vegan in 1987, I was making $2,500 a year and spending $10 a week on food. And amazingly, I ate well! This book shows how easy it is to eat well and be a vegan without spending a ton of money.” Moby, singer and songwriter

All four cookbooks are great to have for a vegan newbie. I love how they all focus on saving time in the kitchen. Making vegan food is not as hard as it seems. And it’s time to let go of the myth that “eating healthy is expensive”, it is not. There is no better time than now to become vegan. The food has so much more variety; restaurants are now much more open to featuring vegan dishes or vegan variations on some meals; supermarkets offer a much wider range of plant-based products for the vegan kitchen; there is a long list of vegan companies that offer delicious meat substitutes; and there are many vegan cookbooks to guide you and give you ideas.

When I became vegan, hardly any of the above mentioned points were available. That is why I learned how to make everything, like sausages, burgers, roasts, pies, cakes, puddings, chocolates, etc. The good thing is that I love to cook, but not everyone does.

I hope that these four cookbooks have given you some ideas. Any one of them will give you plenty of recipes to try out. If you have any questions, please let me know in the comments.