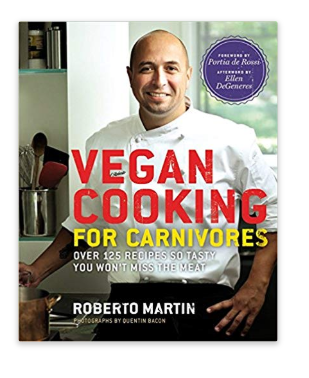 No, vegan food for carnivores is not such an oxymoron at all. The first misunderstanding about vegan food is the “giving up” part. No one’s giving up anything. On the contrary, you’re gaining some extraordinary culinary experiences.

Besides, there are so many delicious faux meats available now which taste so good that even the most hardened meat eaters will admit to their great flavor. 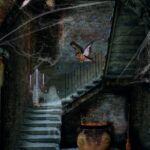 My boyfriend is a carnivore, and I’m vegan. He was dubious about plant based food, forgetting that vegan fare is indeed just that, plant based. It is not some strange concoction that Professor Snape whizzed up in his dark dungeon 😉 . No reason to raise worrisome looks that indicate “uh oh, what is she feeding me now?”

OK, now we got that cleared up 😉 remember, the murky potions from those cauldrons in Professor Snape’s classroom were meant for dangerous trolls, bothersome pixies, and other lurking creatures. For fennel’s sake, do not feed those monsters vegan food! They might get even stronger and more dangerous …

So, What is Vegan Food for Carnivores?

Good question. What exactly? Well, basically, there’s no great secret, no hidden ingredients or magic formulas, to me it is all the same enchilada (and burgers, tacos, sausages, lasagnas, cannelloni, and so on) except that no animals or animal products were used.

Instead, vegetables, and grains, nuts, soy, tofu, tempeh, chickpeas, beans, and other good stuff replaced the animals, creating cruelty-free and healthier versions, and … did I mention the incredible flavors? 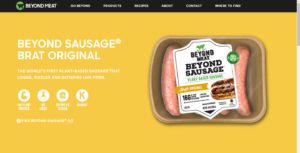 Not everyone is keen on finding meat replacements, but if you really can’t go without the taste of meat, then these brands are worth checking out.

The first time my boyfriend had vegan pizza, he declared that it was the best pizza he had ever had. When I brought my vegan lasagnas to a potluck at work, it was gone in seconds – no leftovers. OK, it sounds as if I’m trying to convince hardened meat eaters to try vegan food. I guess I am, and you’re going to love me for recommending it after you’ve tried it 🙂 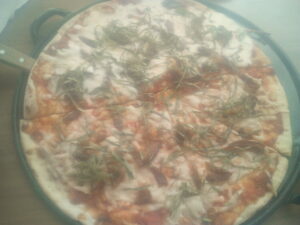 There’s so much on the market, but I already explained that in my previous post. Vegan sausage brands, burgers, sloppy Joe vegan meat, vegan hams, salamis, chorizos, hot dogs, taco fillings, chick’n bits, wings, pizzas, and the list goes on.

So, whoever came up with that “giving up” part, I wonder who that person is, because he (or she) and I need to have a chat, and perhaps also a vegan buffet 😉

I get that question a lot, and I think it’s not that expensive. There are many non-vegan food items that are also high-priced. It all depends. Moreover, if you take in the health benefits that come when you go vegan, you save on many doctor’s visits and pharmacy shopping trips.

I became vegan for the animals, but I immediately noticed how my health improved and my energy increased, which is a huge and welcome bonus. I don’t easily get ill, and the only way I get a cold is at work when a colleague comes to work sick and gets too close to me with his/her germs. That’s a hard one to fight off, but even then, it only takes me a few days to get better.

So, considering fewer doctor’s and pharmacy expenses, it is not more expensive; I’d say, you’re saving a lot of money. Fruits and vegetables are not expensive either. Nuts and grains? Nope, not high-priced. Tofu, soy, tempeh, vegetable stock? I don’t think that’s expensive. Vegan burgers, sausages, and other faux meats? Well, as with non-vegan items, some companies charge more than others and some charge less.

While Beyond Burger is known to be a little expensive, the excellent taste certainly makes up for it. But honestly, I don’t feel like I am spending a lot of money on food.

But I Prefer to Cook. What Vegan Meals Can I Prepare?

Ah, you’re like me, you prefer to cook instead of buying ready-made packages. I sometimes get the burgers and sausages, because I love them, but I really love cooking. I love improvising in the kitchen, but I also follow recipes sometimes, although I do like to make my own variations on some recipes. I just can’t resist improvising. 🙂

It may sound surprising, but basically, you can still make pot roasts, enchiladas, chilies sin carne, and so on. Have you ever had a portobello burger? The portobello mushroom is in itself very tasty, and even more so with spices and herbs. You can really create a delicious burger with it.

Have you ever had lasagna with homemade vegan bechamel sauce? If I told you how easy it is to make bechamel, you’d fall over.

Or how about vegan tortilla soup, Mexican queso, nachos, stroganoff (oh yes, I made that and it was good), chocolate-banana pie, vegan strawberry cheesecake, chocolate cake, creme brulée, …?

While some recipes may take some time (I think that creme brulée might be time-consuming, although I haven’t made it yet), other recipes are short and quick. The same rule applies for non-vegan recipes.

So, Which Cookbook is Good For a Vegan Carnivore?

Since this post is about vegan food for carnivores, there is one cookbook that recently caught my attention. It’s aptly called Vegan cooking for Carnivores. The author and chef is Roberto Martin, Ellen DeGeneres’ personal chef.

When Roberto Martin became Ellen DeGeneres’s chef, he wasn’t a vegan. Ellen and her wife, Portia di Rossi, were though, and Roberto, a lover of good food and with years of experience, just made every meal vegan. 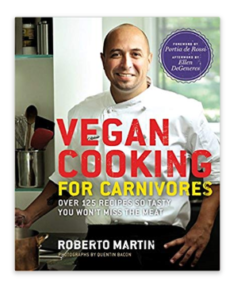 Was that easy? Well, let’s see. Roberto attended the Culinary Institute of America and he was a personal chef to several celebrities, always paying attention to nutrition and health. His cookbook has received 5 and 4 star reviews on Amazon, and it is a favorite with beginner vegans and also non-vegans. So far so good 🙂

Both Ellen DeGeneres and Portia di Rossi are vegans and speak up for animal rights. I’ve received several emails in which Ellen DeGeneres asked for help with animal rights issues. She is very outspoken about it, and well, I think she is just great, witty, smart, and compassionate. And I love her shows. So, the first reason this cookbook got my interest was because of her.

The recipes are easy to make and they do not take up much time. Even advanced recipes (there’s this incredible chocolate dessert, yummy, you should try it out) are pretty easy to follow.

What I like about this cookbook is that it was written by someone who was not a vegan when he asked for the job, but who ended up making every meal vegan simply by changing some ingredients. The recipes are accompanied by large pictures.

You see, vegan food is not protein-deprived, tasteless, or “suspicious”. And this cookbook proves it. In my opinion, Vegan Cooking for Carnivores is perfect for people who are transitioning into veganism (newbie vegans) and for those who can’t go without the heavy, meaty flavors.

Personally, I do not need meat replacements. Even when I ate meat – a little over fifteen years ago), I always ate little of it, perhaps twice a week. So, for me, the meat didn’t have to be replaced. For me, it was chocolate, but that’s another story 😉 That might be something for a new post 🙂

==> Get Your Vegan Food for Carnivores Cookbook Here <==

6 thoughts on “Vegan Food for Carnivores – Not an Oxyymoron? (cookbook review included)”